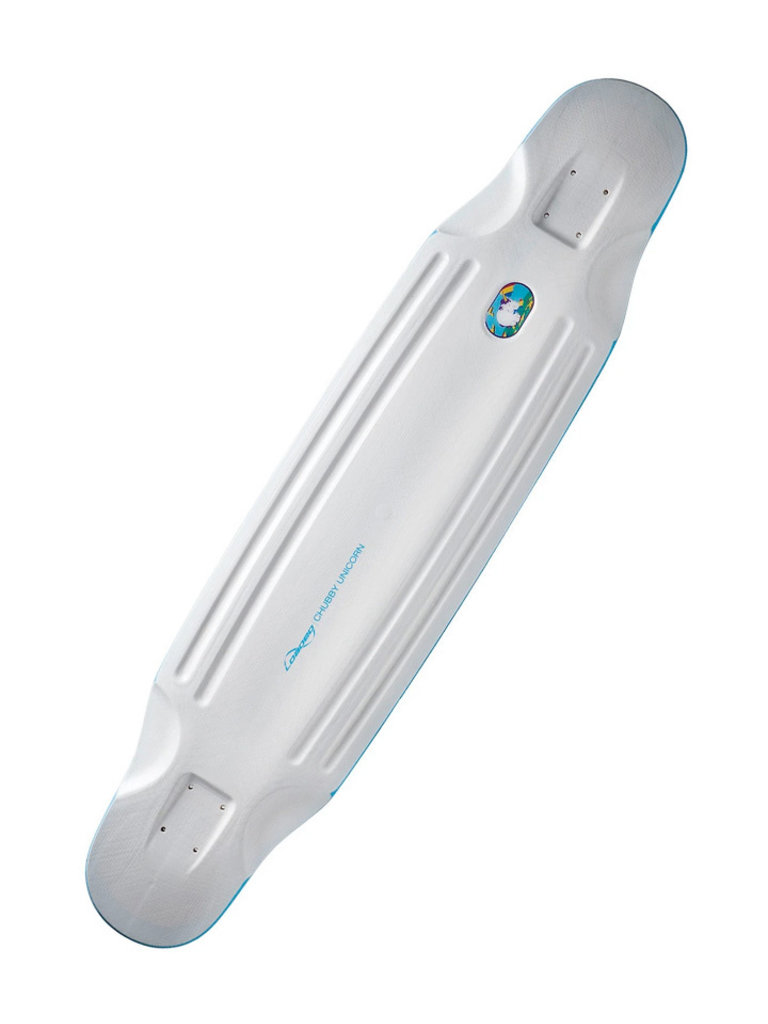 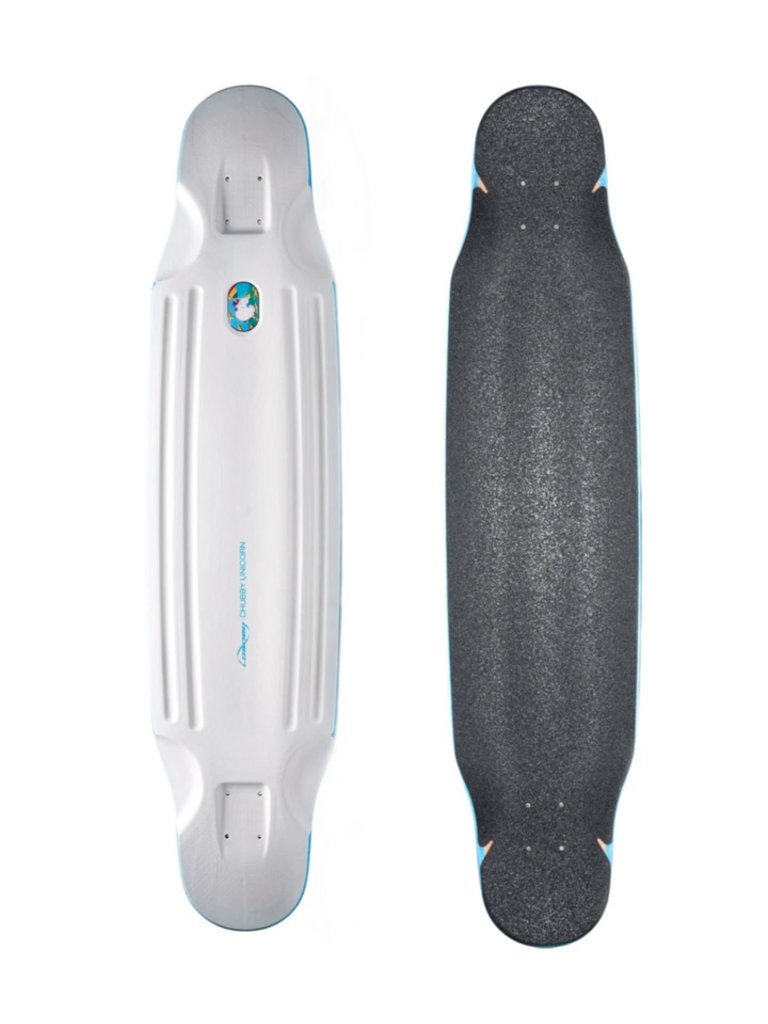 C$399.00
Loaded
2 In stock
Article code P-11686
From the land of marshmallow clouds and rainbow brittle, the Chubby Unicorn gallops out of fantasy and into reality as a chimaeric catalyst for downhill, freeride, and freestyle skateboarding.
Watch video
Share this product: A rockered profile throughout the deck offers many benefits. It creates a subtle and comfortable lock-in for your feet (particularly in combination with the wheel wells/flares), helping them stay firmly planted while sliding. Rocker also slightly lowers the rider's center of gravity for enhanced stability. Finally, the cradle-like ergonomics also provide a steady and natural platform for foot movement, whether you're pivoting your heels over the rail for a predrift or cross-stepping up and down the board.

Graphics
Serendipitously, the iconic Fat Unicorn illustration by Robbie Lee, originally presented by shirt.woot.com, was the obvious graphic inlay for this board. We're grateful for the opportunity to work with the talented Robbie Lee and to be able to collaborate in some fashion with the bastion of modern high brow literature that is Woot. Many thanks to them for assisting in our quest to assimilate into the ranks of such menacing downhill boards as the Killswitch, Demonseed, and Avenger by helping birth this ferocious monster.

Across the rest of the deck's surface are a series of subdued, concentric grey lines. These are contour lines from a topographical drawing of the top surface of the deck, graphically representing and accentuating its complex curvatures. As a somewhat fortuitous result, these contour lines bear resemblance to:

1) the underbelly of a snake (evoking an early incarnation in the board's history, the Black Mamba) or
2) a false wood grain (highlighting the extensive use of composite construction in the Chubby).

Construction
The composite layup of the Chubby consists of a layer of triaxial E-glass followed by a pre-milled basswood core bound by a sidewall of Orangatang urethane followed by an additional layer of triaxial E-glass and finished off with a layer of UHMW. Our design team sought a composite construction primarily for its strength-to-weight ratio in comparison to a standard ply layup. However, reducing the weight of the deck produced a less damp feel when riding due to the lighter weight. To supplant the less damp feel we started exploring the integration of a urethane sidewall (derived from snowboard construction) which provided enhanced vibration damping as well as exceptional durability to side impact and abrasive wear. The urethane sidewall became an exploration in cross-pollinating material technologies acquired from Orangatang wheel development into Loaded deck construction.

While we felt we were at a point where each material of the composite construction was dialed to a specific performance expectation, our team had to optimize the board for production. In order to do so, it took many iterations of precisely aligning composite layup with the complex compression molds. Additionally, we had to explore means of analyzing the pressed blank to account for springback (the process by which the severity of a deck's curvatures are reduced after the part is removed from the mold). We started with a traditional method of cutting the board along known axes and charting the displacement between design sketches and the produced part, but due to the Chubby's compound curvatures we were not initially able to get an accurate account of springback. Thus, we invested our research into a laser scanning device called the David scanner. This system allows us to set up calibration panels behind the object to be scanned and, using a laser, identify points along its surface to rebuild the physical surface into an accurate digital mesh. We concluded with a comprehensive process that accurately transmitted information, materially and geometrically, between the physical and digital realms.